Introduction
This research project involved volunteer groups led by mentors in six regional locations within the UK. The mentors provided local research guidance but members of the steering committee of the Workhouse Network also provided advice on specific aspects of research.

Although each group was autonomous, undertaking research within their regions, it was also important that the project generated meaningful results that were shared across the Network, leading to the development of the digital exhibition, More Than Oliver Twist.

Research aims
The research in each location took as its starting point the residents of the workhouse on census night in 1881. Volunteer researchers reconstructed the lives of each individual, working backwards and forwards in time to build up a picture of the lives of the poor. It is well known that the majority of paupers in the nineteenth century were not resident in workhouses, and at any one time more than 90% of paupers were in receipt of "outdoor" relief i.e. relief received in their own homes. Moreover, of those paupers who did enter the workhouse, the majority stayed for only a few weeks, although some did stay for considerably longer.

It seems odd that historians do not know more about the dynamics of pauper lives. We know a lot about welfare policy, central and local administration, workhouse scandals and the treatment of paupers resident in workhouses, but generally we know very little about outdoor relief, and even less about how episodes of indoor relief came about and how they fitted with the rest of the lives of the poor.

This research, then, aimed to provide the longer-term context of pauper lives. They emerged as people, and not just as paupers: widows, deserted women and unmarried mothers were not necessarily in a permanent condition, and many were found to have lived more affluent lives for many years before they found themselves as workhouse residents. Some were born into poverty, as illegitimate children, or orphaned at a young age, spending large parts of their lives in institutions. Some of the women escaped abusive and violent relationships, some were abusive and violent themselves.

Children, the elderly and unmarried mothers dominated the workhouse populations we studied, but able bodied men of working age were also found in the workhouses. Some were temporarily incapacitated through illness or injury, some were long-term residents and others were part of a semi-criminal underclass who spent large parts of their lives moving between workhouses and prisons. A few were alcoholics and many suffered from mental illness. Very few were lazy and feckless. Many were simply unable to find work due to an economic downturn, technological redundancy and an over supply of cheap labour.

The project has shown that workhouse populations on census night 1881 were diverse; groups of strangers drawn from large areas with the temporarily incapacitated "respectable poor" mixed together with the feckless alcoholic and long term inmates with severe mental health difficulties.

Research process - overview
We were very fortunate to have a very diverse range of sources at our disposal to investigate the lives of the poor - the poor and the criminal are amongst the best documented of all people in the nineteenth century. However, archival materials were not uniformly available with only a very small number of Poor Law Unions in England and Wales having anything near a full set of records.

With this in mind, the research commenced with some basic family history research. Starting with the workhouse population on census night, 1881, researchers then worked through census returns 1841-1911 to reconstruct a broad outline of the lives of the poor. This basic framework was nothing more than a skeleton, and further detail was then added using additional sources, Family historians had access to birth, marriage and death certificates and parish registers, which helprf fill in some of the gaps between census years. However, beyond that each regional group was dependent upon the availability and accessibility of sources available in local, regional and national archives, as well as online resources. 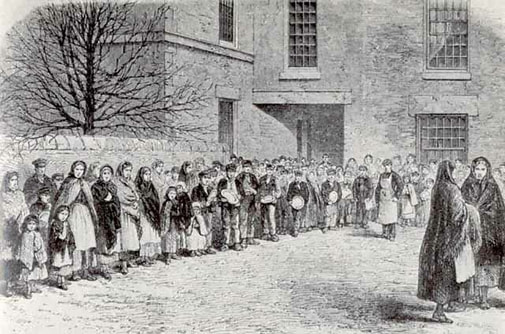 Online records
There are a large number of reliable online sources available. However, there are two main sources of information that are available nationally:
Research outputs
As the availability of source material is not consistent across the country it was not possible for each group to research individuals to the same level of detail. Moreover, even within a well-documented Poor Law Union some individual paupers, and even groups of paupers, are much better documented than others.

However, there were some key objectives for the collective project:
​“Neither the life of an individual nor the history of a society can be understood without understanding both…”