More than Oliver Twist
​The real lives of the poor

An Arts Council England funded Subject Specialist Network project, run by the Workhouse Network
The More Than Oliver Twist project provided training for six workhouse sites to research the lives of inmates in their institutions in the 1881 census. From this research, they created a digital exhibition: More Than Oliver Twist. The project is funded by Arts Council England and supported by Nottingham Trent University and The National Archives. 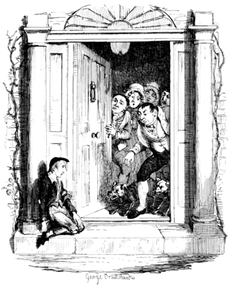 ​Oliver Twist is, without doubt, the most famous of all paupers from the nineteenth century. Dickens' novel, first published in 1838, recounts the tale of the orphan Oliver, his sufferings within the formal welfare system of the baby farm and the workhouse, his short-lived apprenticeship and as part of Fagin's criminal gang, Throughout his life he encounters authority figures, the majority of whom show little or no genuine concern for his welfare, before he is eventually saved by the selfless acts of the motherly Nancy and the kindly Mr Brownlow. Oliver Twist has become a shorthand for Victorian cruelty, and Dickens' representation of the workhouse system and of life outside of workhouses has come to dominate the popular imagination.

But Dickens was writing in the immediate aftermath of the passing of the Poor Law Amendment Act of 1834, and during a period of considerable opposition to its implementation. It was intended as a polemic, a politically-motivated narrative designed to expose the inhumanity of a welfare system based on Utilitarian philosophical principles.

So what was the real experience of the nineteenth-century poor? Orphans, unmarried mothers, deserted women, abandoned children, the elderly, those suffering from physical and mental ill-health and disability, And what about those who were simply unable to find work, especially during times of economic hardship?

This research project will create the largest database of poor individuals and families yet constructed to shed light on the diverse experience of the poor It is funded by Arts Council England.

"Spend but a few days in the police-court," says Juvenal, "and then call yourself an unhappy man if you dare." Had he sat on a Board of Guardians, he would doubtless have included that also as a school of personal contentment.

All sorts of griefs and tragedies are brought up before us, some of them abnormal and Theban in horror, some of them so common that we seem to hear them unmoved: an honest man who cannot find employment, women with unborn babes kicked, starved, and deserted, children neglected or tortured, poor human beings marred in the making, the crippled, the diseased, the defective physically and mentally, too often the pitiful scapegoats for the sins of the race.

All these things seem too terrible for words or tears; it is the cheeriness and humour of the poor, their pluck and endurance, their kindness and generosity one to another, that bring a lump to the throat and a dimness to the eyes.
From Margaret Nevinson, Workhouse Characters, (1918)